Can You Really Become Addicted to Antidepressants? 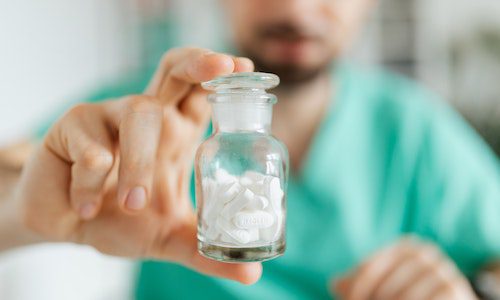 The question of whether or not a person can become addicted to antidepressants does not have a simple yes or no answer. While antidepressants are not addictive like certain medications, such as benzodiazepines or opioids, and certainly not as addictive as illegal street drugs, such as methamphetamine or heroin, they can lead to dependence. When dependence develops, withdrawal symptoms occur when the person stops taking the drug; alternately, the person may be afraid to stop taking the drug for fear they will be unable to function.

Antidepressants are prescribed by medical professionals to treat depression ranging from moderate to severe. WebMD explains that they work within the brain by balancing chemicals such as noradrenaline and serotonin, that affect emotion and mood. When people are depressed, their brain does not produce enough of these chemicals. Unlike many other kinds of medications, antidepressants do not work immediately. They can take up to several weeks to begin to cause noticeable effects.

According to the Mayo Clinic, the most commonly prescribed types of antidepressants are called SSRIs (selective serotonin reuptake inhibitors) and include citalopram (Celexa), fluoxetine (Prozac), escitalopram (Lexapro), paroxetine (Paxil, Pexeva), and sertraline (Zoloft).

Other forms of antidepressants include:

Unlike many commonly abused drugs, antidepressants do not cause the user to get a feeling of euphoria or crave another dose. This is one reason many people believe these drugs are not addictive. However, since the effects of the medication are not felt for several weeks, many patients think it is not working and take more than the prescribed dose. When they do this, they increase the chances of developing a tolerance to the antidepressant right away, which can lead to the need for increasingly higher doses (and thus increase the chance for negative side effects). Others abuse the drug by taking it with alcohol to increase its effect. Doing this is very dangerous and can make depression worse or cause an overdose.

Signs and Symptoms of an Antidepressant Overdose

Antidepressant overdose symptoms range from mild to severe. If the symptoms are severe and go untreated, the overdose may be fatal. The severity of the symptoms depends on the type of antidepressants taken, the amount that was taken, and whether or not they were taken with alcohol or another drug.

Nausea, headache, vomiting, and drowsiness are mild symptoms of an overdose. Other symptoms include:

You Are Not Alone

Many people with a substance use disorder feel like they are alone. If you or a loved one is struggling with an addiction to drugs or alcohol, you are not alone. Help is available. At Canyon Vista Recovery Center, located in Mesa, Arizona, our skilled staff use a combination of clinical, medical, psychiatric, and holistic care to treat your disease. We teach you the skills you need to live a clean and healthy life.

Are you looking for AZ addiction treatment for women? Learn more about programs offered at Canyon Vista Recovery Center. Contact us at (888) 979-1840