Cocaine Addiction: What You Need to Know 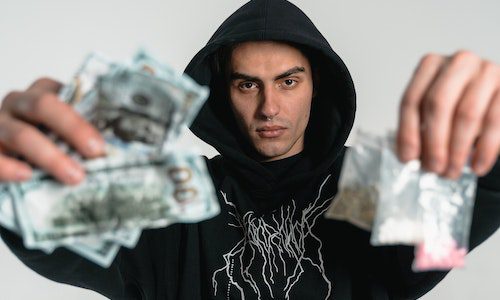 In the United States, using cocaine as a recreational drug is illegal. It is classified by the federal government as a Schedule II controlled substance because it has a high potential for being abused, leading to severe physical or psychological dependence. According to an article in CNN Health, cocaine is rated as the second most addictive substance in the world.

Cocaine is a highly addictive stimulant drug and pain blocker. It is extracted from the leaves of the coca scrub, also known as Erythroxylon coca (E. coca), which is native to South America. This drug was first used for medical purposes in 1884 as an anesthetic during eye surgery and is still used for certain medical purposes.

When illicit cocaine is sold on the street, it looks like a white, fine, crystal powder. Crack cocaine, a crystalized form of the drug, is the most potent form of the drug. To increase profits, street dealers often mix cocaine with flour, talcum powder, or cornstarch. Sometimes other drugs are mixed in with the cocaine, such as synthetic opioids, amphetamine, or fentanyl. Buying cocaine from a street dealer is extremely dangerous because you never know what it contains, and the odds of death from an overdose increase.

How Do You Use Cocaine?

Cocaine can be taken in several ways. Some people snort the powder through their noses or rub the substance into their gums. Others inject it into their bloodstream after they dissolve the powder. When the solution is mixed with heroin and injected, it is called a Speedball. Many users smoke crack cocaine, also called freebase cocaine. They heat the crystal and inhale the vapors into their lungs. Sometimes the crack is mixed in with tobacco or marijuana and smoked like a cigarette. On the street, cocaine has dozens of names, such as blow, snow, rock, crack, coke, and glo.

How Does Cocaine Affect the Brain?

Aa a stimulant, it affects the brain and central nervous system. It gives the user an energy surge because it increases the brain’s dopamine levels related to action and reward. Dopamine is usually recycled back into the cell that released it once it has sent its signal, but the cocaine prevents that from occurring. Large amounts of dopamine build up the brain’s reward system circuitry, reinforcing the drug-taking behavior. Over time, the drug use causes the brain to become less sensitive to dopamine, and the user has to take more to get the desired effect, or high. With continued use, the excessive amounts of dopamine can cause damage to the brain, leading to neurological conditions and seizure disorders.

Since cocaine is a highly addictive drug, abuse can quickly become an addiction. Being aware of the signs of cocaine use in a loved one may help you get them into treatment sooner. The user may have burn marks on their lips or hands, nosebleeds, or white powder residue on their mouth or around their nose. They may be having financial difficulties or have no interest in things that they once enjoyed. Physically, you may notice weight loss, dilated pupils, and a runny nose. The user may experience mood swings, be overly talkative, or have an unusual boost in confidence.

When a person stops using cocaine, they will experience withdrawal symptoms. The psychological and physical symptoms will vary depending on factors such as the person’s metabolism, tolerance, severity and length of addiction, and any other addictions or mental health conditions. Generally, the person will experience depression, anxiety, agitation, and mood swings. They will feel exhausted, restless, and irritable. Angry or emotional outbursts may occur. They will have difficulty sleeping and concentrating.

In addition, they may experience:

The timeline of cocaine withdrawal depends on various factors such as dosage size, the length of time the drug was used, whether other drugs are also used, and any co-occurring physical or mental health issues. The first phase of cocaine withdrawal can begin within ninety minutes to a few days after the last cocaine dose. The entire withdrawal process can take up to ten weeks. Some users experience withdrawal symptoms that last for months. These symptoms are known as post-acute withdrawal syndrome, or PAWS.

Get the Help You Need

If you or a loved one is struggling with an addiction to drugs or alcohol, get the help you need to live a clean and sober life. Call and speak to a caring professional at Canyon Vista Recovery Center, located in Mesa, Arizona. We will answer your questions and get you started on your journey to recovery.

Are you looking for AZ addiction treatment for women? Learn more about programs offered at Canyon Vista Recovery Center. Contact us at (888) 979-1840