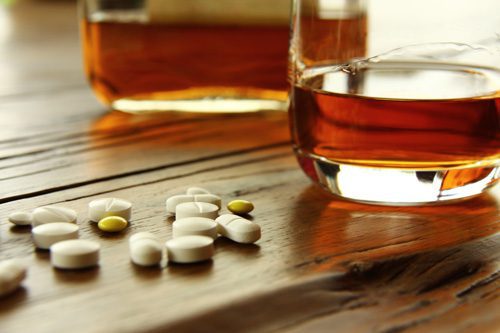 Mixing alcohol and opiates, whether legal or illicit, is very dangerous.

In fact, the combination could even be deadly.

Originally derived from the poppy plant, opiates have been used for medicinal and recreational purposes for thousands of years. Today, there are still opiates that come from the natural, raw opium, but there are others that are manufactured. The chemical structure of manufactured opiates is the same as natural opium.

All of these drugs have one thing in common, they depress the central nervous system to cause a person’s heart rate and breathing to slow down.

Symptoms of opiate intoxication include:

Even though alcohol is a legal and common substance, if it is taken in large quantities it can cause intoxication. What many people do not realize is that the body’s liver can only process one serving, or a single drink, of alcohol in an hour. When the amount of alcohol exceeds that, the person can become intoxicated.

A serving of alcohol includes:

During a two-hour time period, if a person drinks more than four to five drinks, it is considered binge drinking. Binge drinking can lead to severe intoxication, alcohol poisoning, or death.

Symptoms of alcohol intoxication include:

Taking Opiates and Alcohol Together

Examples of things that will be intensified include:

The Dangers of Mixing Alcohol and Opiate Drugs

Just as the examples mentioned above, mixing alcohol and opiates enhances the depressant effects on the central nervous system. This leads to a decrease of heart rate and blood pressure and a suppression of neuronal firing and respiration rates. Because alcohol enhances the sedating effects of opiates, a person can overdose, lose consciousness, and die in as little as five minutes.

Additional serious and often life-threatening dangers of mixing these two substances include:

Side Effects of Combining Opiates and Alcohol

In addition to the previously mentioned side effects of the dangerous mixture of opiates and alcohol, there are also cognitive and emotional changes that take place. The individual will experience difficulty with problem solving, concentration, and paying attention. Their ability to think will be impaired and slowed. They will have problems developing new memories.

Additional side effects may include:

If you or a loved one has an addiction to drugs or alcohol, getting the right help is essential for living a healthy and sober life. The professional counselors at Canyon Vista Recovery Center in Mesa, Arizona, are there to answer your questions and help guide you on your road to recovery. Canyon Vista offers a full continuum of care including traditional and holistic therapies, life skills, nutritional guidance, and an extended care treatment program.