Help for Veterans Struggling With Addiction 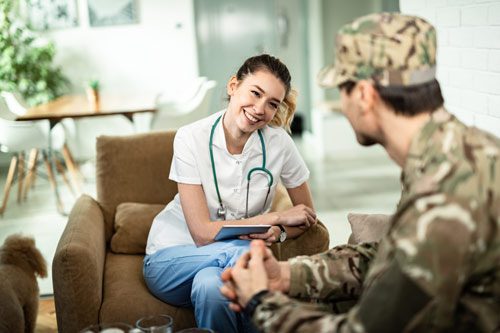 In the United States each year, approximately 200,000 military personnel leave active duty service and return to civilian life as military veterans. These men and women face many unique challenges as they adjust to life as a civilian. One of the biggest challenges veterans face is finding ways to cope with any traumas they may have experienced during their years of active duty. Sadly, an increasing number of veterans resort to drugs or alcohol as a coping mechanism.

Although anyone can become a victim of substance use disorders, veterans tend to be at a greater risk of drug or alcohol addiction than the general population. Veterans often turn to these substances to self-medicate physical injuries and disabilities, traumatic brain injuries (TBIs), post-traumatic stress disorder (PTSD), illnesses, sexual trauma, depression, anxiety, stress, and homelessness. It is not uncommon for veterans to suffer from more than one of these conditions.

The Link Between PTSD & Addiction in Veterans

Many veterans with substance use disorders have co-occurring post-traumatic stress disorder. Once known as shellshock and battle fatigue, PTSD can be caused by experiencing or witnessing a traumatic event such as warfare, natural disasters, terrorist attacks, serious accidents, sexual or physical assault, emotional loss, and numerous other situations. Although many veterans experience PTSD after a traumatic event that occurred during combat, it is also possible for military personnel who have not seen combat to suffer from PTSD if they were exposed to other types of trauma, such as the violent death of a close friend. A doctor in the military could experience PTSD due to the cumulative trauma that builds after treating numerous combat casualties. When veterans use drugs or alcohol to try to alleviate the symptoms of PTSD, they become dependent on the substance, and addiction quickly occurs.

The number of veterans with an addiction to drugs or alcohol has continued to increase throughout the years. The following statistics were gathered through several sources including the 2020 Guide to Substance Abuse in Veterans, National Institute on Drug Abuse, Substance Abuse and Mental Health Services Administration, and The United States Department of Veterans Affairs.

Addiction to drugs and alcohol among veterans is a growing concern. If you or a loved one is a veteran struggling with a substance use disorder or co-occurring disorders, you are not alone. The expert staff at Canyon Vista Recovery Center, located in Mesa, Arizona, understands the unique needs of veterans. Using a combination of psychiatric, clinical, medical, and holistic approaches combined with our Tactical Recovery Program, we will provide you with the tools you need to navigate the road to recovery. We understand the full impact your military service has had on your life. Now is the time to get the help you need. Call us today.

Looking for addiction treatment for veterans near Phoenix?  Learn more about programs offered at Canyon Vista Recovery Center.  Contact us at (888) 979-1840.