Kratom: This Herbal Supplement Isn’t as Safe as You May Think 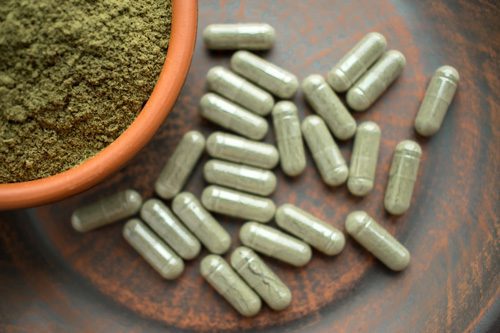 Kratom abuse and addiction is on the rise in the United States.

Sold as an herbal supplement, it can produce a high very similar to opiates and opioids.

Kratom is a tree-like plant (Mitragyna speciosa) native to Southeast Asia and certain areas of Africa. The bitter leaves of this tropical tree contain opioid-like compounds that have mind altering, or psychotropic, effects.

Taken in small doses, kratom acts as a stimulant similar to coffee. In larger doses, it has opiate-like effects.

For centuries, kratom was used in Thailand and surrounding countries as an herbal remedy by workers and farmers to boost energy and relieve muscle strains and other common ailments. The natives of these counties also used kratom as a substitute for opium when opium was not available.

How Is Kratom Taken?

Kratom can be taken in many ways. In the United States, it is commonly taken in the form of loose powder, compressed tablets, or capsules which are made from grinding the leaves. In some states, kratom is sold as a nutritional or dietary supplement. Extracts are another popular method of consumption. Extracts have a much stronger effect since they are a concentrated form of the leaves.

People often add kratom to their food or mix it into their drinks. When it is mixed with cough syrup containing codeine or a caffeinated beverage, it creates a drink known as 4×100 and has an effect very similar to alcohol intoxication. It is also sold as a drink, called ketum, in bars such as the Kava and Kratom Bar in North Carolina.

The following is several other ways kratom is taken:

Where Is Kratom Sold?

Since kratom is not an illegal substance at this time, it is easy to order online. It is sold in health stores, head shops, smoke shops, many convenience stores, and some gas stations.

Commonly referred to as herbal speedball or ketum, kratom is known by other names including:

How Does Kratom Affect the Brain?

The effect that kratom has on the human brain is similar to both stimulants and opioids. Kratom leaves contain two key compounds: 7-a-hydroxymitragynine and mitragynine.

Similar to other drugs that cause opioid-like effects, several research studies have shown that kratom is an addictive substance.

The Side Effects of Kratom

The side effects of kratom depend on several factors including the dose taken, the length of time the user has been taking the drug, and the type of kratom consumed.

Nausea, loss of appetite, and weight loss are common side effects of kratom. Individuals may also experience the following:

Because of the stimulant effects of kratom, people that abuse the drug for an extended length of time often suffer from chronic insomnia and fatigue. They may also experience severe weight loss, anorexia, and darkening of their facial skin known as hyperpigmentation. Some individuals suffer from delusions, hallucinations, and severe confusion. They may experience dizziness, become aggressive, or develop thyroid problems.

Signs and Symptoms of a Kratom Overdose

The following is signs and symptoms of a kratom overdose or of an overdose when kratom is used in addition to another substance such as over-the-counter medications, alcohol, benzodiazepines, opioids, or other illicit drugs.

The Legal Status of Kratom

In the United States, the legal status of kratom as of January 2019, is complicated. Some states have banned it completely. Others have regulations regarding the drug. On the federal level, it is considered legal.

If your loved one is abusing kratom, or you think you may have a problem with the substance, help is available. The process for treating kratom addiction is similar to treating other forms of drug or alcohol abuse. Canyon Vista Recovery Center can provide the foundation for a sober future by offering detox, intensive counseling, holistic therapies, family programs, and aftercare planning.