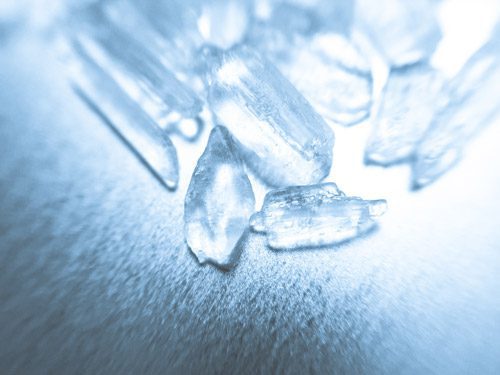 A highly addictive drug, methamphetamine is a stimulant classified by the Drug Enforcement Administration (DEA) as a Schedule II substance. Drugs in this classification have a high potential for abuse that could lead to severe physical and/or psychological dependence. For these reasons, they are considered dangerous, and using them recreationally is illegal.

According to the National Institute of Drug Abuse, methamphetamine is generally used as an odorless, white, bitter-tasting pill or crystalline powder that dissolves easily in alcohol or water. A form of the drug called crystal methamphetamine looks like bluish-white, shiny rocks, ice chips, or glass fragments.

When taken, the drug affects the brain and the central nervous system. It causes the release of large amounts of three of the brain’s neurotransmitters–serotonin, dopamine, and norepinephrine–leading to very powerful euphoric effects. The user feels confident, invulnerable, and has a strong increase in levels of energy, alertness, and awareness. Methamphetamine has a powerful effect on the brain’s reward system, making it highly addictive.

According to MethProject.org, methamphetamine is “one of the most addictive substances” there is. Some users can become addicted to methamphetamine after just one use. As the user craves the drug, they continue to need more to satisfy their need. Tolerance develops, and the user needs higher and higher doses to get the same effects. They quickly become addicted to the drug. If they try to stop using methamphetamine, withdrawal symptoms such as depression, anxiety, fatigue, and insomnia begin.

People addicted to meth exhibit many physical and behavioral symptoms. They may have a sudden, noticeable weight loss as their appetite is greatly reduced. They will have dilated pupils and rapid eye movement. Mood swings, emotional outbursts, and agitation are common. Their skin may have sores, and their lips or fingers may have burns.

The severity of the withdrawal an individual experiences depends on a number of factors:

Their previous mental and medical conditions, as well as their age, must also be considered.

Methamphetamine withdrawal consists of two stages. The first stage is the most severe, with the most intense symptoms during the first 24 hours. The symptoms gradually lessen over the next seven days. Many people experience a subacute stage that lasts another two weeks.

When a person stops using methamphetamines, they experience a crash within the first day of their last use of the drug. They experience extreme exhaustion and fatigue. Throughout the first 24 to 48 hours, they will feel confused and have a sharp decline in cognitive function and energy. They will experience headaches, abdominal cramping, nausea, and profuse sweating. Overwhelming feelings of depression and anxiety are common. They will experience agitation, insomnia, and restlessness. Some people also experience delusions, hallucinations, and paranoia. The cravings for methamphetamines are intense. During days three through ten, symptoms generally peak. Physical symptoms begin to subside by the end of the second week.

The second stage of withdrawal lasts another two or three weeks. By the end of the fourth week, most withdrawal symptoms are usually over. Any symptoms remaining will continue to lessen in intensity over time. In some cases of methamphetamine withdrawal, symptoms such as anxiety, depression, and other psychological symptoms may last for several more months or even years. This is known as post-acute withdrawal syndrome (PAWS).

Episodes of post-acute withdrawal syndrome unexpectedly come and go. Each time, symptoms can last for a day or a few days. The symptoms can vary in severity from one episode to the next. They may disappear completely for a long period of time and then suddenly reappear. Symptoms of post-acute withdrawal usually are more severe if they are caused by a stressful situation. However, they can appear without any reason at all.

Do Not Wait If You Need Help

If you or a loved one struggles with an addiction to drugs or alcohol, do not wait any longer. Now is the time to get the help you need. Call and speak to a caring professional at Canyon Vista Recovery Center located in Mesa, Arizona. We will answer your questions and help you begin your journey to recovery.

Looking for methamphetamine treatment in Arizona? Learn more about programs offered at Canyon Vista Recovery Center.
Contact us at
(888) 979-1840