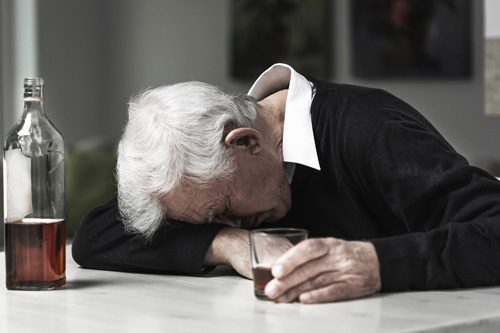 When you think of binge drinking, who comes into your mind?

A college student drinking excessively on the weekend? A young person having too much to drink at a party? It may surprise you to learn that most binge drinkers fall into the age range of 26 and older. In fact, many senior citizens, aged 65 and above, also binge drink.

What Is Binge Drinking?

When an individual drinks an excessive amount of alcohol in a single session over a short period of time, they are binge drinking. The National Institute on Alcohol Abuse and Alcoholism defines binge drinking as “a pattern of drinking that brings a person’s blood alcohol concentration (BAC) to 0.08 (g/dl) or above.”

A drink is classified as the following:

In the United States, binge drinking is one of the most common patterns of alcohol use.

A study conducted in 2015 by the Centers for Disease Control and Prevention (CDC) found that in the United States one in six adults, or 36 million people, reported binge drinking. Each person binged about four times a month, drinking an average of seven drinks each time. This totals approximately 17 billion drinks a year, or about 467 drinks per binge drinker. The study also found that men binge drink twice as often as women, with four out of every five drinks being consumed by men.

The following additional facts are from the Substance Abuse and Mental Health Services Administration (SAMHSA):

Each year the number of binge drinkers continues to rise. Many teenagers and young adults want to be seen as their own person. Some use binge drinking as a way to resist social norms and rules, while others drink to assert their independence and boost their confidence. For older individuals, common reasons for binge drinking include:

Side Effects of Binge Drinking

The side effects of binge drinking generally depend on several factors:

Short-Term Side Effects of Binge Drinking

Some side effects of binge drinking are minor and temporary, while others can cause permanent damage. For example, your reaction time is delayed by drinking alcohol—which puts you, other drivers, and pedestrians in danger if you decide to drive. Also, excessive drinking impairs judgment—putting you at risk for possible unintentional injuries from domestic violence, sexual assault, or falls.

Sudden temporary side effects include:

If enough alcohol is consumed, fatal alcohol poisoning can occur.

All of the body’s organs and systems are affected by long-term binge drinking. For example, possible cardiovascular problems include hypertension, stroke, an irregular heartbeat, or a sudden heart attack that can cause death.

Several additional harmful long-term side effects of binge drinking include:

Binge drinking can also lead to an array of other problems including car accidents, unemployment, sexually transmitted diseases or infections, or domestic violence. For women, unplanned pregnancy can occur—often resulting in poor outcomes such as miscarriages, stillbirth, or fetal alcohol spectrum disorders.

Although engaging in binge drinking doesn’t automatically mean someone has a substance abuse problem, this behavior is a definite warning sign. If you or a loved one are struggling with alcohol addiction, help is available. Canyon Vista Recovery Center provides a full continuum of care for men and women diagnosed with alcohol use disorders.