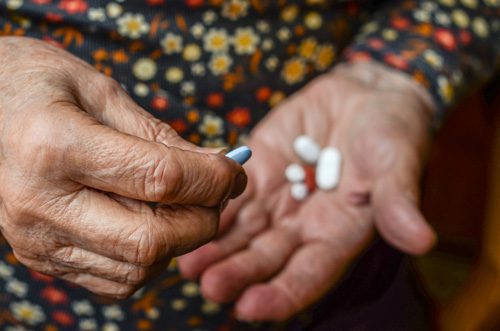 Think about the terms “substance abuse” and “drug or alcohol addiction.”

What age group do they make you think about? Most people think about young adults or teenagers. However, there is another age group where addiction is a growing problem. Senior citizens are becoming addicted to drugs and alcohol at alarming rates.

According to The Office of Alcoholism and Substance Abuse Services (OASAS), there is a hidden national epidemic of substance abuse among the elderly. Their article goes on to state that “it is believed that about 10% of this country’s population abuses alcohol, but surveys revealed that as many as 17% of the over-65 adults have an alcohol-abuse problem.”

Although alcohol may be the substance that is most commonly abused by the older generation, it is often complicated by the use of over-the-counter (OTC) and prescription medications. Combining alcohol and medications can result in adverse reactions that are significant and can even result in death.

Individuals who have reached the age of 65 and have been abusing drugs and/or alcohol for many years are referred to as hardy survivors. People that fall into this category are also known as early onset substance abusers. There are more men than women in this group. Generally, hardy survivors have endured more severe results because of their addictions including cognitive and medical issues, legal problems, and difficulties in their social life.

Individuals who begin abusing drugs and/or alcohol later in life are considered late onset, late onset substance abusers, or accidental addicts. This group is made up of more women than men.

People who belong to this group usually had no abuse or addiction issues when they were younger. Their loss of control and resulting substance addiction generally comes from health-related issues, a catastrophic life event, or a series of events that were unfortunate or caused major life changes. Whatever the cause, it takes a great emotional toll on the person.

There are many life events that could contribute to a person turning to drug or alcohol abuse in their later years. There may be mental or physical health decline related to issues involving illnesses, major surgeries, or memory loss resulting in feelings of depression and anxiety. A spouse or loved one may become ill or die leaving the survivor feeling alone and lonely. Retirement may cause financial strain or worries, and feelings of purposelessness, anxiety, and depression.

Another cause of late onset substance abuse among seniors is prescribed opiates such as OxyContin, Hydrocodone, and Codeine. These drugs are used to manage pain caused by an injury, surgery, or chronic condition. Many individuals that take these medications as prescribed, over a long period of time, develop a physical addiction to them.

Benzodiazepines are also a highly addictive type of drug prescribed to seniors to treat pain, insomnia, or anxiety. Examples of this type of medication include Xanax, Ativan, Valium, Klonopin, and Librium. The number of senior citizens addicted to this type of drug is increasing every year.

An article in the U.S. National Library of Medicine National Institute of Health, states that “Substance abuse, particularly of alcohol and prescription drugs, among adults 60 and older is one of the fastest growing health problems facing the country. Yet, even as the number of older adults suffering from these disorders climbs, the situation remains underestimated, under identified, under diagnosed, and under treated.”

Sadly, many seniors do not get the help they need because health care providers often overlook or have difficulty diagnosing substance abuse in older individuals. Substance abuse symptoms in the elderly sometimes mimic symptoms of depression, dementia, diabetes, and other behavioral and medical conditions common among people in this age group. Other factors that could contribute to substance abuse being overlooked or misdiagnosed include:

Since many seniors take prescription medications for various conditions, it can be difficult to identify the symptoms of substance abuse. Warning signs include:

It is also important to make sure your aging loved one is not drinking in spite of warning labels on prescribed medications.

Older people are often reluctant to seek professional help for substance abuse because they are ashamed and embarrassed, consider it a private matter, or are afraid of losing their independence.

Regardless of age, it is never too late to get help for a substance abuse addiction. The caring staff at Canyon Vista Recovery Center welcome clients of all ages. They provide residents with an extended care treatment program that addresses all aspects of their recovery through traditional and advanced holistic therapies, exercise, nutrition, and educational process groups.