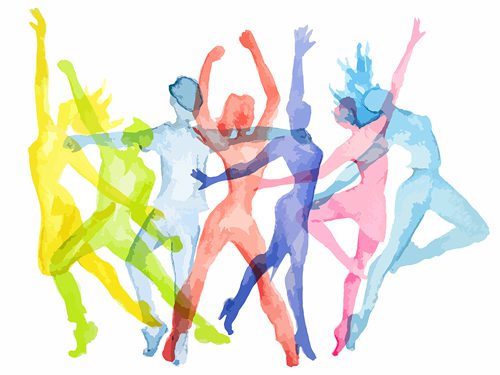 In the words of American dance pioneer, Ruth St. Denis, “I see dance being used as communication between body and soul to express what is too deep to find words [for].”

For many people suffering with a substance abuse addiction, dance movement therapy (DMT) provides a way to express their feelings without having to verbalize them.

What is Dance Movement Therapy?

The American Dance Therapy Association defines dance movement therapy “as the psychotherapeutic use of movement to promote emotional, social, cognitive, and physical integration of the individual.” This type of expressive therapy is a valuable tool when used in addiction recovery, especially for those individuals who are unable to express themselves in talk therapies. Some individuals with a drug or alcohol addiction find it difficult to put their feelings or thoughts into words or have trouble describing their experiences.

Dance movement therapy, with or without accompanying music, includes improvised freestyle movements or dances that are choreographed, such as Latin dances, ballroom dancing, or ballet.

How do Dance Movement Therapists Use DMT?

The following are several ways dance movement therapy is used to help individuals recovering from an addiction:

Dance movement therapy can facilitate changes in an individual’s mood. It can also improve a person’s behavior and physical functions.

One of the main underlying principles of dance movement therapy is that the body and mind are interconnected. Because of this interconnection, it facilitates healing to treat them together rather than separately.

Through spontaneous movement and improvised dance, DMT provides individuals a way for non-verbal expression. It gives them the opportunity to explore various ways of being and expressing their feelings and thoughts.

The History of Dance Movement Therapy

For thousands of years, people have used dance for emotional expression and enjoyment. However, according to the History of Dance and Movement Therapy – Healing Through Movement, by Emily Sexton, it wasn’t until 1942 that dance therapy, as we know it today, got it’s beginning. That year, Marian Chase, who was a dancer, choreographer, and performer was invited to work at St. Elizabeth’s Hospital in Washington D.C. where she used dance therapy with some of the patients. Considered the founder of modern dance and dance therapy, Marian Chase became the first full-time dance therapist in 1947.

Throughout the decades, the following events contributed to the growth of dance movement therapy:

In 1993, The Authentic Movement Institute was founded, and a grant to investigate dance therapy for medical illnesses was awarded by the Office of Alternative Medicine of the National Institute of Health. That same year the American Dance Therapy Association also received a grant to explore dance therapy.

Choosing the right substance abuse treatment program is essential for your long-term sobriety. It is important to find one that includes both traditional and holistic therapies, such as Canyon Vista Recovery Center in Mesa, Arizona. Although it does play an important role in the treatment of addiction, dance movement therapy by itself is not enough to overcome substance abuse. At Canyon Vista, individuals are offered dance movement therapy as part of their recovery process along with traditional therapies, educational programs, nutritional guidance, advanced holistic practices, and exercise.